Parts of a Gun - Gun Anatomy 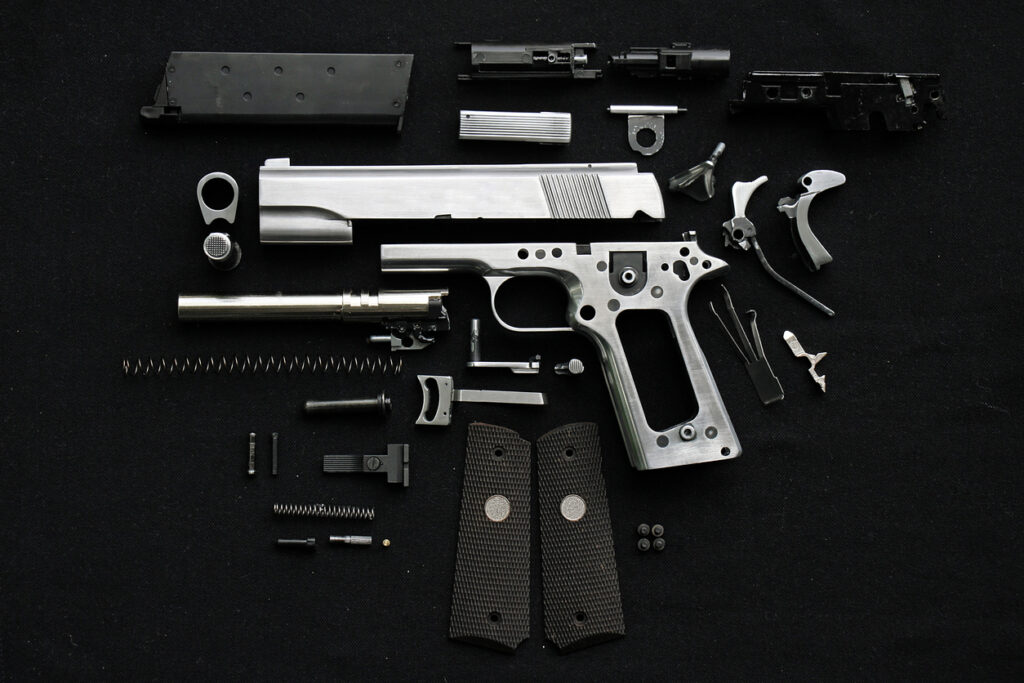 The first and foremost thing that you need to know about guns is their anatomy. They are lethal, yet complex devices that requires diligent care and attention.

For these reasons we believe only knowledgeable owners deserve to have a weapon in their home.

In this article, we look forward to sharing information on both the anatomy of guns as well as how to use they in a safe and effective manner. We hope you enjoy our article and stay safe!

Parts of a Rifle

A rifle is a special firearm that was designed for accurate and precise shooting. Rifle guns were initially made during the 15th century in Europe, and they looked nothing like the modern ones.

But with the recent spike in technology, we now have a very wide variety of these kinds of guns on the market: bolt action, semi-automatic, automatic, single shot, etc.

Rifles (and other guns too) can be very different from model to model, so today, we will share with you all the basic parts of the rifle.

Once you know the basics, you will be able to distinguish one gun from another. Almost all firearms have these basic parts that we will share here, but there will be some changes between different models and types of firearm.

So, the three main parts of the rifle (and most of the guns) are action, stock, and barrel.

It is the main part of the gun – the part where all the mechanisms and important items in a rifle are located. It is like the brain of your rifle, the only part that is necessary for shooting.

Other parts are important too, but you can make your gun shoot without stock, but not without an action part.

You can also find a trigger, trigger’s guard, receiver, bolt, and rear sight on a rifle’s action.

A safety part of the gun is also located here to prevent a rifle from an accidental shooting. Some models also have a pistol grip, sling attachment, and carrying handle on the action part of the rifle.

Usually, the magazine is located on the outside part under the rifle’s action part. You can easily assemble it and change whenever you want; that’s why rifles are often used in the military.

This is the back part of any rifle, commonly known as the handle of the gun. This part of a rifle is usually pretty standard, but some models can also have different shapes of stock butts and various sling studs.

Sometimes a rifle’s stock has a grip or a toe, but not in every model.

This is the last main part of any rifle, and barrels can vary from model to model in length, diameter, and some other additional parts. But, in general, a rifle’s barrel consists of a long metal tube and a little muzzle at the barrel’s end.

Muzzles can vary in shape and form very much, depending on what model you have: a simple civilian or a combat weapon; is it automatic, semi-automatic, etc.

If you are looking for a hunting rifle, you can definitely take a look at bolt-action models because they are very good for any unpredictable cases. They are powerful, and you can achieve incredible accuracy if you use bolt-action rifles.

Parts of a Pistol

A small, neat pistol is a popular weapon for self-protection and are some of the best selling weapons ever made.

A pistol is a lightweight handgun that was introduced to the public in the 16th century, and still, it is one of the most popular handguns on the market.

Nowadays, almost every pistol is semi-automatic because they are the most convenient ones from the pistol family.

However, earlier in time, people also used manual reporting and even single-shot pistols.

But today, we will discuss the parts of a modern semi-automatic pistol. They can vary from model to model too, but most of them will have those parts.

Here, like in a rifle, you have all the mechanisms that are involved in a shooting. In the pistol, the action part with a hummer and firing mechanism is the part of the one big component that is called a receiver.

It is the pistol’s stock – one of three main parts that are prominent in every single firearm.

Grip in a pistol is quite short just to hold it with your arm, and it is notable for its double purpose: it serves as your pistol’s handle, and it is a housing for your patron’s magazine.

This is a home and a holder for your patrons. There are a couple of cartridges in a pistol’s magazine. Depending on the model of a pistol, this part of a gun can be detachable or built-in.

This part of a pistol provides you with a needed move that starts a handgun, preparing it for shooting.

It is used in almost every semi-automatic pistol. Also, there is a slide lock present on the back end of the slide. This part of the gun will lock a slide when the last patron has been used.

This part of the pistol is called to remove any excess brass from the firing chamber.

Another part of the pistol that is needed for releasing and ejecting casings from the pistol.

These two details of the gun were made to create a chain that will result in ignition in the cartridge, followed by a shot from the pistol.

These sights are essential for accurate shooting. Not every pistol has both of them, but most of them do.

Like with the rifle, a safety part of a pistol is here to prevent accidental discharge of your pistol.

Pulling a trigger starts the chain, which causes your pistol to shoot. You only need to press your finger on the trigger and boom: it is done. A trigger’s guard is the part of a pistol that protects you from an accidental shooting.

In comparison to a rifle, any pistol has a really small barrel and a muzzle. But still, it is an essential part of the gun that helps your bullet to get the right trajectory.

Parts of a Revolver

Revolvers are one of the most elegant guns ever created. In our opinion, it is a perfect balance between long-barreled weapons like shotguns and short-barreled pistols.

There are plenty of short-barrelled revolvers on the market, giving you considerable choice in when it comes to selecting the right option for you.

Here are the basic anatomy aspects of the revolver broken down:

The first part of the revolver is where the revolver's handle or a grip panel is attached to the other parts of the gun.

Hammer and trigger guards are also located on the frame, and they have their own respective functions. The hammer is needed to ignite the gun, and a trigger guard was made to protect the trigger from accidental pulling.

The barrel part of any revolver is just like in any other gun: it is a metal tube that allows a bullet to have a straight path. Nowadays, revolvers have rifling bores inside a barrel, but ancient 18th and 17th-century models also had a smooth bore.

It is a part of an action section of a revolver, and obviously the critical section that initiates a gun shot.

This part of an action section holds the bullets in place. Cylinders can be swung out with a release latch that you can find on the side of a revolver frame.

This part of a revolver is used for removing spent cartridges from the revolver's cylinder, creating a place for new bullets in your cylinder.

Parts of a Shotgun

A shotgun is a long-barreled gun that has a huge variety of different types. You can find break-action, fully-automatic, lever-action, pump-action, and other shotguns available for military and civilian purposes.

The shotgun is very versatile, and it can be the best gun for protection in the wilderness.

Additionally, we feel it is a particularly special option as it can fire with multiple projectiles.

Here are the key parts of a shotgun, broken down.

It is a part of your gun that you place against your shoulder for you to aim at your target. It is one of the most important parts of the shotgun, and it can also have a recoil pad on it.

These parts of a shotgun are responsible for starting a fire (a trigger) and protecting you from an accidental shooting (trigger guard).

This is a classic mechanism that is present in nearly all firearms, and you have probably already figured out its purpose is to prevent accidental initiation of a shotgun’s mechanism.

All the important inner mechanism of any shotgun is located in a receiver.

It is the part of a shotgun where the shells are stored right before the shooting (patrons of a shotgun). Shells will be transferred to a chamber from a shotgun’s magazine by a bolt.

This part of a shotgun that provides you with proper loading and unloading of your gun. It blocks the breach while propellant burns.

In a shotgun, it is the place where your gun loads, then fires, and finally unloads the ammunition. This part of a shotgun gives a weapon its name (break-action, bolt-action, etc.)

The end part of a shotgun – a metal tube that provides an exit way for your shell and surrounding gases. This path, a hollow part of the barrel, is called a bore.

Shotguns usually have a smooth bore, and rifled bores usually occur in rifles. Also, there is a choke on the end of a muzzle that controls the shot.

How to Use Your Gun Safely

Now you know all the parts of various guns, you need to learn about the general, yet vital rules of gun safety. These work in direct correlation with the gun parts, because almost always, accidents happen because of improper use.

2. Never point a muzzle into your direction or any other living being you don’t want to be shot.

3. Always expect the gun to fire, even if you know that it is not loaded. Sometimes bullets can get stuck, or any other thing can cause a shot and consequently, serious injuries.

4. Keep in mind that you can touch a trigger only when you are ready to shoot. In other cases, a simple finger cramp or some scary accident around you can cause a shooting and tragedy.

5. Do not use any gun if you are not familiar with the model or aren't sure how to use it. First, carry out proper research and seek the relevant instruction from a professional. Better to be safe than sorry!