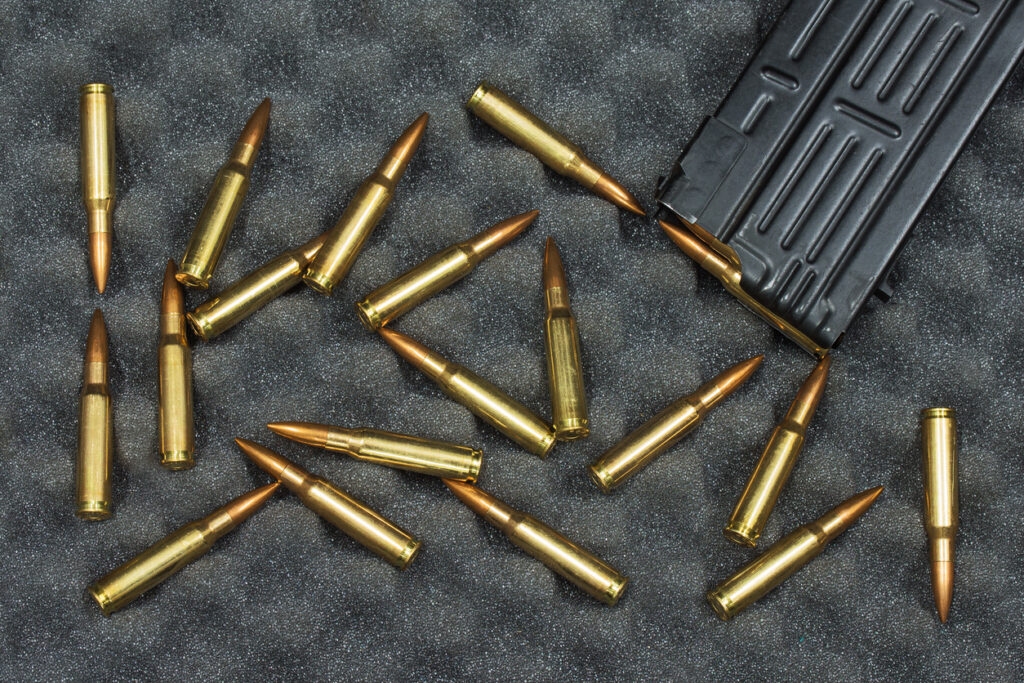 The .300 Win Mag is probably one of the most famous cartridges on the planet. It is a true all rounder that can provide you with long range accuracy but also stop a large animal up close and personal.

It might not be the best cartridge out there in every situation, but it does damn well in most situations, and it is reasonably priced. So, it is easy to see why it has become so popular.

However, Winchester surprised people with the .300 and how different it was to the others on the market.

It had a long case when compared to the .388 and the neck was very short in comparison to anything else in the same market.

This meant it was very quick, meaning it could travel far and it could be packed with a lot more powder than its rivals.

Straightaway you can see why it appealed to people.

It became popular with owners of long magazine rifles such as the Remington M700 and Winchester M70. However, the key to its success was that it was relatively short, so it pretty much fit into any brand of rifle.

So, the 300 Win Mag was a very versatile factory-made cartridge, that consumers could trust because it carried the well-respected Winchester brand name.

These are the current 3 rifles I use with the 300 Win Mag:

This is an excellent value for money rifle, it isn’t top of the line, but I have shot many an Elk with it. It is also a great option for people that prefer rifles with very low recoil.

It is a gun you could practise with all day, and the last shot is just as comfortable as the first. It doesn’t have an amazing trigger, but there is very little trigger creep, which means you get a nice consistent pull.

It is regularly used by militaries around the world, so it is a worthy gun for anyone’s collection.

As this gun is around the $1500 mark, and I believe it is the best valued precision rifle you can buy. Whether you are trying to hit a target or an animal, if you are trying to do this at over 1200 yards then this is a great option for you.

This gun is so fun to shoot, and it is so accurate that you will have little choice in spending hours at the range testing your skills to the limit. It won’t be long before you spend more on the ammo than you ever did on the rifle.

It is widely available, so a hunter knows no matter where they end up in the world, they are likely to be able to get their hands on it, and on top of that they are well priced.

If you are desperate for some real-world reason, on why you should buy a .300 Winchester Magnum then just look at how many militaries use them. They are one of the most widely used sniper cartridges in the world.

If that is not a huge tick in its favour, then I don’t know what is.

They are widely used in long range competitions, specially the 1000-yard plus competitions.

As you would expect from a sniper quality cartridge, they experience very little drift in the wind, so they are also excellent for competitions.

I am not a competition, or regular shooting range user, I am a hunter. So, the most important thing to me is the speed of kill.

That means I need ammo that travels far, travels accurately, is not overly affected by wind and other weather conditions.

This means I am more likely to hit the animal where I want to hit it, once hit, I want the bullet to kill the animal in a short a time as possible out of respect to the animal, but I do not want to go overboard and destroy the meat.

Most of my hunts are in the 150kg range, and I experience instant kills or kills easily within 10 seconds most of the time.

This is very important to me, there is no point talking about how flat of a trajectory a bullet has, or what great drift it has… if it takes too long to kill an animal then I am not interested in it.

This is the real world; it is not about fancy specs. I can trust the 300 Win Mag to kill an animal very quickly and consistently. That is why I use it.

Obviously to get consistent and quick kills you need to use the right grain.

I use this grain when hunting light deer and antelopes. This grain produces nearly instantaneous kills at medium and long distances time and time again.

To me I want to see a deer drop straight over like it has fallen to sleep, ideally, I do not want to see it walking around before it drops over out of respect to the animal.

I use this grain for deer in the 100-150kg range, and the grain really excels. It will definitely take-out animals smaller than this range, and it will likely kill animals much larger than this.

However, if I know beforehand that 90% of the animals, I will see are going to be in the 100-150kg rage then this is the grain I would choose.

Probably the most versatile grain, which I use when I have very little idea of what I might find, which are some of the best hunts aren’t they!

This grain will easily handle any animal between 100kg and 330kg, which is a huge range of animal sizes.

This grain is when you are going after the big un’s, as they are hard to take down.

The bigger the animal the more accurate you need to be with your shot placement, and the renowned accuracy of the 300 Win Mag is why I choose it when going after big game.

If you aren’t in range to be confident of hitting the head or neck, then in my opinion you shouldn’t take the shot.

What ammo do I use

I use standard factory ammo, and these are the ones I tend to use the most. They have all proven themselves to me in the field and have all been a part of successful hunts:

These are excellent for beginners who need to spend hours on the range working up through the short ranges.

They are cheap, so you don’t need to worry about your budget, and you can spend time on honing your craft and skills. Which is vital in my opinion.

Hornady has been producing well respected ammo for many years now, and the ELD-M is very good indeed. If you like competing or are regularly hunting at very long ranges, then this is a very good option.

They will fly past ammo like the 6.5mm Creedmore and the .308 Winchester Magnum without a second thought.

As the name suggests this is good ammo if you are going after the big trophies like moose, or if you are on a safari adventure in Africa.

These are not to be wasted on the range, they excel when hunting as they have top end accuracy and ballistics.

It is time to start closing this article out now and cover why I really like the "300 Win Mag" (.300 Winchester Magnum).

It preforms consistently well over many weights, so you can use it for just about anything.

You can throw in a 150 grain and go after wild hogs, antelope, pronghorn, sheep, and light deer.

You can get an impressive 3390 FPS out of a 150 grain, and distance is not an issue. The shot will be very fast and very flat, taking out a lot of the guess work.

You can bump the grain up to 180 and still get 2950 FPS and a ballistic coefficient of 0.509 which means it is very very very accurate. It will easily and quickly kill northern whitetails and mules.

Then you can bump the weight up to 200 grain and go after things like grizzlies and moose.

Just remember if you miss a kill shot with a deer if it’s not a big issue, miss it with a grizzly and it might run straight at you and give you a good beating. You have been warned ha-ha.

If you are a beginner or novice, live in Northern American and only want to own one rifle then the .300 win mag is what you should get. You can tailor it to basically any hunt you want.

On top of the hunting variety, the .300 win mag is used by military sniper experts and has won numerous long-range shooting competitions especially over the 1000-yard mark. The 300 win mag wins on so many fronts it is crazy.

Like with a lot of things, to get the best out of something you need to use it in a way the manufacturer intended it to be used.

If you use the "300 Win Mag" (.300 Winchester Magnum) in situations it is meant to be used in and take the time to match the bullet weights to the intended purpose, then you have an exceptional cartridge that will perform extremely well.

So, if you miss the target you cannot blame the cartridge, it is on you ha-ha.

As with any advice you see and read on guns and hunting, you must adhere to the laws of the areas you live or hunt in.