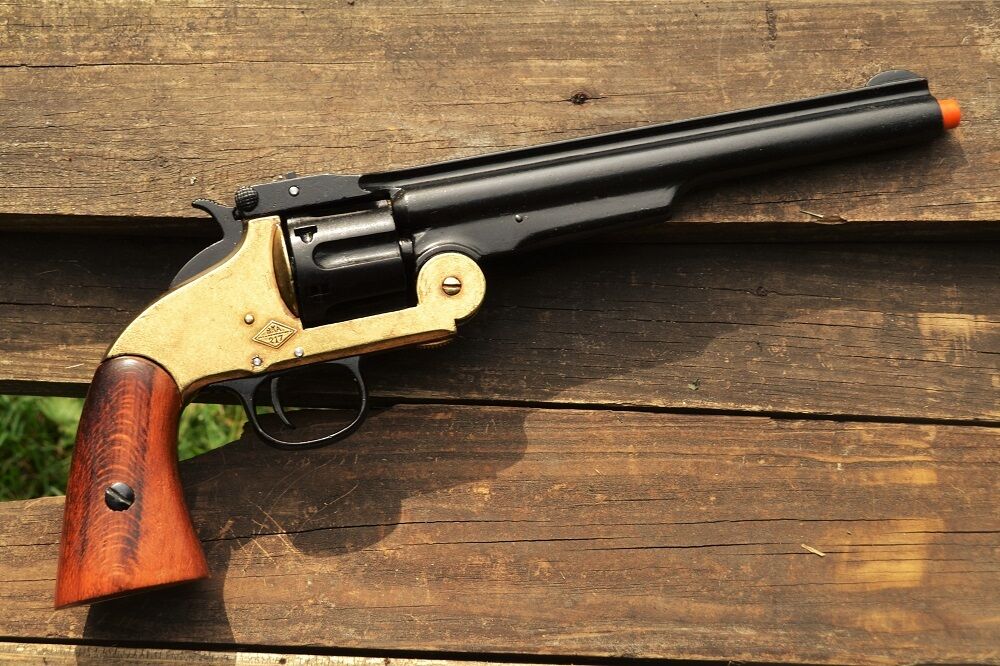 A brief history of the Smith & Wesson Model 3

If you have ever seen a Western movie, then you will have seen the Schofield Revolver. It is famous in the movie world but also in real life.

The Schofield Revolver at the movies

Like I have said the Schofield Revolver has appeared in many movies, here are some notable ones:

Charlie, the second in command of the outlaw gang has 2 Schofield Revolvers as his sidearms of choice.

It is the gun of choice for Ned Pepper in his final showdown with the hero of the piece Rooster Cogburn. It is an underrated film for sure, I will whisper this quietly, but I prefer it to the John Wayne version.

It features a character called the Schofield Kid, named after the gun, and the legend Clint Eastwood uses the Schofield Revolver in the epic gun fight at the end of the film.

The Schofield Revolver and its famous users

The Schofield Revolver has become synonymous with some very famous names of the past:

Each gun was then stamped with the Smith & Wesson serial number and with the Wells Fargo company stamp by the Wells Fargo armorer. This in effect made them unique, limited edition, and therefore highly collectable in the future.

The Smith & Wesson Model 3 is instantly recognisable and it truly is a classic, and it is awesome that a gun that was in original production between 1870 and 1915 is still so famous.

This means the trigger preformed one task and one task only… it released the hammer. The hammer had to be cocked separately. All triggers were like this, until the double-tigger was designed.

It fired pre-assembled ammo that contained the primer, gunpowder, and bullet. This was different to earlier guns that required these to be loaded separately.

This is where you push the barrel down giving you access to the rear of the cylinder, where you can empty the chambers of the empty cartridges and replace them with the new cartridges.

You then snap the barrel back and twist the cylinder to lock it. Top-break guns are the style of guns whenever you see a game of Russian Roulette played out on TV or in the Cinema.

These mods were done in 1875 and were designed to make the Model 3 more suitable to the military.

With the mods in place the Schofield Revolver won the main military contract for revolvers.

This was good news to Schofield himself because he patented the locking system, so he was set to become a very rich man if the Schofield became the revolver of choice for many years to come.

However, the military also purchased Colt Peacemakers and Smith & Wesson got greedy, they should have designed the gun to fire the .45 Colt ammunition, but they developed the .45 S&W and forced the hand of the military bean counters to adopt their ammunition.

This was a miscalculation by Smith & Wesson as it was a superior gun which would have lasted the test of time and made them a lot more money in the long run, if they had played by the rules of the contract.

The locking system of the Model 3 was far superior to the Colt Peacemaker, the cartridges of the Peacemaker could only be ejected one at a time with an ejector rod.

Yet, the Schofiled was designed to eject and load easily in under 30 seconds… which was achievable even on horseback.

There are actually 2 versions of the Schofield revolver, the first 3000 serial numbers are classed as the 1st model, and then after 3000 is generally considered version 2.

The second version dealt with wear and tear issues and brought in the concept of replaceable components for parts that were subject to heavy use. This seems an obvious thing to do nowadays but it was ground-breaking at the time.

Amazingly the Schofield Revolver was only in production for 2 years before it was discontinued, along with all other variants of the Model 3.

They were all replaced by the New Model No. 3. Smith & Wesson did this because they didn’t want to pay a % of each sale to Major Schofield, so they had been developing their own locking system in secret.

Major Schofield was court martialled, possibly because of the money he was receiving for the patent, then his wife died, and for reasons relatively unknown Major Schofield took his own life with one of the Schofield Revolvers he designed. Rather fitting I suppose.

The Schofield Revolver in action

Even though the Schofield Revolver was only in production for a couple of years, there was a lot of them produced and they were widely available.

They were widely used in the Indian Wars or Frontier Wars, the Spanish-American War, and the Philippine-American War.

As they became less frequently used by the military you then saw them sold off as military surplus, where gunsmiths would repurpose them for commercial usage.

Usually this meant that they were nikel plated and the barrel was shortened from 7 inches to 5 inches.

Imitation is the sincerest form of flattery

Perhaps why the Schofiled Revolver seems so recognisable is that it has seen many guns based on its design both by Smith & Wesson themselves but also by gun manufacturers in pretty much every country in the world.

So, what you might recognise as a Schofield Revolver is actually a gun paying “homage” to it.

Here are some examples of revisions and blatant rip offs:

Australia was quick to get on board with the Model 3 and various territories bought these revolvers over the years, and they were in law enforcement circles for over 30 years.

They were well liked as they were easy to use by their mounted troopers and were only available to the law, therefore surprisingly they are basically all known, and can be researched and tracked in the Service Arms of the South Australian Police directory for example.

Liege was the Belgium gunsmith town of the time, and they took their reproductions one step further. Whilst other countries and gunsmith took the Model 3 design and made it their own, and they were clearly distinguishable.

The tactic of the Liege gunsmiths was to make replicas that were indistinguishable. So that you thought you were buying a Smith & Wesson but you were not, this clearly crossed the line.

They used the Model 3 copies made by the Spanish gunsmiths Orbea. They were used by the Arditi Italian elite units and were used throughout World War l by the Italian army.

The Philippine Liberation Army basically stole or bought a huge cache of revolvers during the Philippine Revolution, and they were used extensively in other wars like the Philippine-American war.

Another army that would use the Spanish copies of Smith & Wesson revolvers during World War l, but don’t feel sorry for Smith & Wesson too much they still made a killing during both World Wars.

The Russian model nearly led to the downfall of Smith & Wesson. The Russian military placed large orders for 3 versions of the Model 3.

They then took the orders, and basically refused to pay for them, then they refused to take delivery.

Well after they got a batch of them, they then had their own gunsmiths copy the design and they made their own.

However, do not presume these guns were cheap knockoffs, well actually they were cheaper, but surprisingly they were actually considered to be of higher quality then the Smith & Wesson’s, which is a double kick in the balls if you ask me.

As mentioned previously Smith & Wesson brought out their own version of their own Schofield Revolver in the name of advancement and improvement, but really, they were sick of having to keep paying Major Schofield.

Smith & Wesson actually did a modern run of the Model 3 between 2000 and 2003. They claimed it was a true reproduction and you were getting an exact gun that was available in the past.

Anyone that knew anything about guns, knew that this was a stretch, and it was just marketing babble. There were numerous differences made for safety, functionality, and profit margins.

The Spanish military had a contract for the Model 3 with Smith & Wesson. However, in 1884 the law was changed in Spain so that they did not have to recognise international copyrights.

All copyrights had to be registered Spanish copyright office. This meant that the Spanish army could cancel the Smith & Wesson contract and had Spanish gunsmiths namely Orbea make their own versions aka copy the Model 3.

These were widely used in the Philippine revolution, Rif war, Spanish-American war, and the Spanish civil war.

Britain has rich history of making guns which is weird I suppose considering they aren’t available to the general public; they do like to have an advanced military though or at least used too.

Britain were happy to make their own versions of the Model 3 like the M1884 but they were also willing to buy from Europe, especially from Orbea.

The Schofield Revolver is almost as famous in Fiction as it is in Non-Fiction, and it effortlessly seems to blur the two together. You are as likely to read about it in a history book as you are seeing it in on a Saturday afternoon Cowboy & Indian film.

What is truly astonishing is how much it is engrained in the military history of so many countries, whether that is with the true Schofield Revolvers or with their numerous replicas and copies.

It is a true historical marvel that has helped shaped American history for the good and the bad.