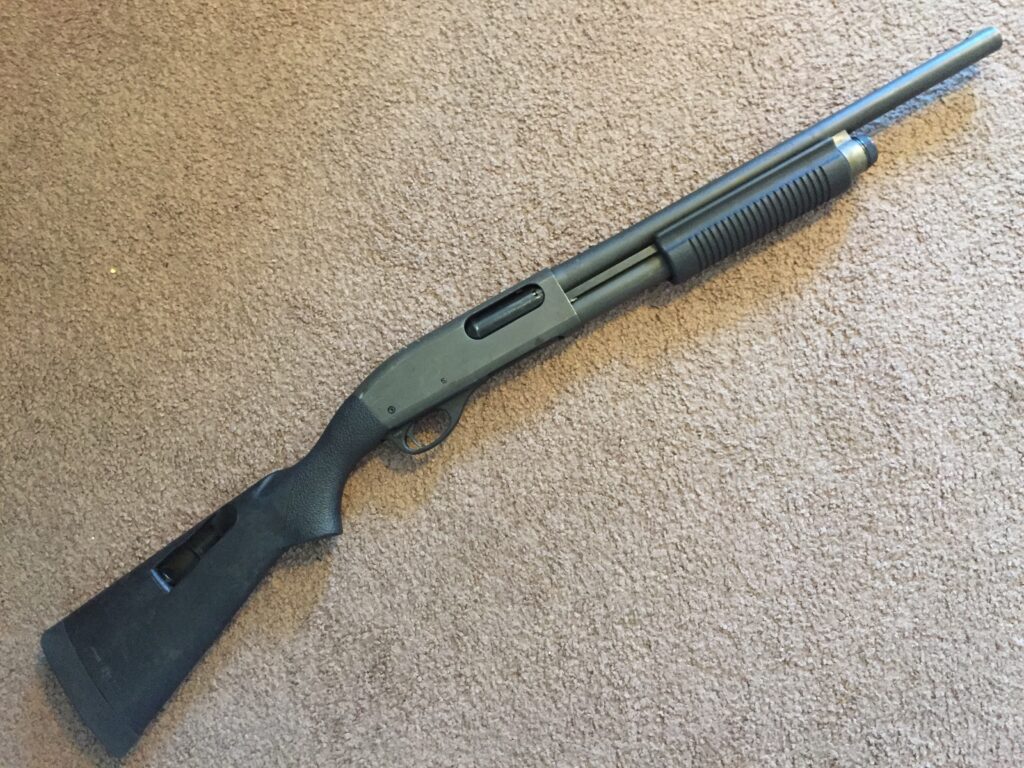 The 5 Remington shotguns you must own

I have owned many Remington guns from their range of handguns, rifles, and shotguns. Whilst they are all excellent, I just think their Shotguns have a little extra magic about them.

So, without further ado lets have a deep dive into the shotguns made by Remington.

Remington was founded way back in 1816 by Eliphalet Remington II. Like most great companies they were founded on the back of someone looking around at what they could buy and thinking I can do better than that. Then actually doing it.

Soon after he entered a shooting competition with a homemade rifle, and it was so different and impressive that other competitors ordered the same gun from him. Remington was officially open for business.

A decade later he opened a large factory in IIion in 1928, which is still in use today with a few upgrades obviously.

In 1912 Remington merged with Union Metallic Cartridge company so that it could expand into the ammo market.

They solidified their reputation as firearm makers, by producing a wide range of weapons for allied nations in WWI. Guns such as the M1907-15 Berthier, Pattern 1914 Enfield, M1917 Enfield, M1911, and the M1891 Mosin-Nagant.

However, WWI nearly bankrupted them as they over-produced and had a huge stockpile when the war ended. The US Government stepped up to the plate and bought the stock and rightly so.

Remington realised that whilst war could be profitable, it could not be relied on for sustainable growth.

They realised that hunting and civilian sales was what was needed for consistent sales, and then use wars for extra sales… as bad as that sounds.

Remington isn’t one of those American family owned from start to finish success stories as such, takeovers, buy outs, mergers and debt have always been a part of the Remington story.

However, whoever owned Remington or whatever financial turmoil they were in… they always produced world-class firearms.

So, it is no wonder that no matter what mess they were in financially, there was always someone who saw its potential and viability.

Remington have been around for over 200 years, so it is no surprise that they have provided a whole host of iconic guns over the years and their shotguns are no different.

The 11 is an old classic semi-auto shotgun which came from the brilliant mind of John Browning. I love these old recoil operated semi-automatic shotguns, as they test your technique to the max.

If you don’t have good technique then be prepared for a lot of jamming and failures, which are actually your failure as a shooter and not the guns fault at all.

Remington’s first ever slide action shotgun that had a slide-ejecting slide-action.

It was a thing of beauty and was meant to blow the Winchester 1912 out of the water, it didn’t quite achieve that but it showcased what excellent shotguns Remington would be capable of making.

Remmington took what they learned from the 31 and released to the public what would become one of the most widely bought shotguns ever… the majestic 870.

The 870 and its many variants have been used at all levels in the military, law enforcement, hunting, home defense, sport, and simply for pure unadulterated fun.

Not content with mastering the pump action shotgun with the 870, they wanted to be the market leader in the semi-automatic shotgun field. Which they achieved as the 1100 is the best-selling semi-auto shotgun in the world.

It is basically the best sport or hunting shotgun you could buy form beginner to master in my opinion.

Sometimes you look at a gun and think about how good it was, and how popular it was with people in the know… and you wonder how it could possibly be discontinued.

This is the case with the 3200 in the clay pigeon world.

A over/under shotgun which seemed to level up any clay shooter, and I still know clay shooters to this day which will hunt for used 3200’s rather than buying a modern sports shotgun.

Remington Shotguns I own

I am a big fan of Remington and own all these models.

Coming in at around the $900 dollar mark it is affordable for most people, but it is also used at the elite level for competition, hunting, and tactical purposes. Versality and performance with excellent value for money, is a thing of beauty.

As the years roll on more and more shotguns come out with their unique selling points, and “game changing” advances in technology.

Yet if you compared your brand-new Remington 870 Wingmaster, then it would still be almost identical to your great-grandfather’s 870 Wingmaster.

Remington believe in its design, and its quality… so they don’t mess with it.

However, don’t be fooled that this perceived lack of innovation has meant other shotguns have surpassed it. Nope, it is still one of the best preforming shotguns you can buy.

In my humble opinion the 870 Wingmaster is by far and away the best pump action shotgun on the market, it is reliable, smooth, and it looks incredible.

Another shotgun by Remmington that has barely changed. Yes, it makes sense to make improvements on the materials used but if the design doesn’t need changing then don’t just change it for the sake of it!

This is a shotgun for sport, so don’t buy it as an allrounder, as you can only buy chokes suitable for sporting activities like light modified, modified, improved cylinder, and skeet.

When you swing the Remmington 1100 Sporting 12 at a moving clay, it is like the shotgun is an extension of your arm. The swing is so natural, well balanced, and smooth.

Some people think that the lighter the shotgun is the easier it will be able to manoeuvre but that isn’t always the case.

The Remmington 1100 Sporting 12 is on the expensive side at around $1700 but it could be the only sporting shotgun you will ever need.

In fact, it is so well made and reliable, that it will probably out live you! If you like semi-auto shotguns, then you will love this one.

Duck hunting is big business, and it is no surprise that Remmington has a shotgun specifically designed for Waterfowl. It is in fact the second biggest hunting market after deer.

Any duck hunter will know the perils of cold hands, so any waterfowl shotgun needs to be operated safely and effectively with heavy gloves and the Remington Versa Max Waterfowl Pro achieves this effortlessly.

Sitting around in cold late-season hunts can hurt your motor and mental skills, so you need a gun that can be operated and accurately shot in those physical and mental conditions.

These cold and possibly harsh conditions can wear you down, but they can wear a gun down too. They use nikel and Teflon coating throughout the gun to ensure that rusting never becomes a problem.

The Remmington Versa Max Waterfowl Pro is a semi-automatic shotgun, that will help you bring home your bounty in the toughest of hunts.

At around the $1700 mark you certainly pay for the privilege, but you get an expertly made and robust gun which will last decades. So, I think $1700 actually provides great value for money.

The M887 is like the tank of the shotgun world, it is near indestructible. If I was trapped in a post-apocalyptic world, then this is the gun I would want in my survival bag.

I would be able to defend my home or shelter effortlessly, and if there is a pond nearby then those ducks are toast.

It is rubber coated which gives it a modern tactical military look, but it isn’t just for show, it means there is no exposed metal whatsoever. So, it will never rust.

This means you can be a little rougher with it, and leave it exposed to some pretty harsh conditions without fear of it failing you.

The 887 uses Remington’s knowledge of what works from the 870 but repackages it for the newer generation. However, there is nothing the Remmington Model 887 Nitro Mag can do that the 870 can’t.

The M887 is a pump action 12-gauge shotgun of the highest quality, and just what you would expect from a Remmington gun.

Remmington are truly the masters of producing excellent affordable shotguns, marketed precisely to the types of people who want them. It is a pretty simple business model really. At around $700 it is an absolute steal.

If you are new to hunting and you like having large birds in your sights, but you aren’t sure on what gun to buy. I would probably start you off with a second-hand Remington Model SP-10.

With the right pellets I have no problem going for a shot upwards of 75 yards, and the SP-10 is one of the most accurate shotguns I have used and tested in that interesting 50 – 75-yard range that distinguishes good wildfowl hunters from average ones.

Despite its range, which means it needs to have a bit of weight to it, it never feels overly heavy, and it has a lovely balance to it, and the recoil is very light considering.

I have used this gun in some pretty miserable conditions, and it handles just as well in snow and rain as it does in glorious sunshine.

The model SP-10 is a great starter gun for wildfowl, and it is pretty useful for turkey hunting, but you will probably need a comfortable sling for it.

Rightly or wrongly Remington will forever be inextricably linked with American history and culture.

Whether it is for producing the best shotgun in existence today – the 870 Wingmaster, or unfortunately for having one of your products used in the Sandy Hook Elementary School shooting… what cannot be denied is Remmington is a part of American lore.

What I do know personally is that Remington make an extensive range of shotguns that are hard to beat in any field they are designed for.

I would have no hesitation recommending a Remmington shotgun to an absolute beginner duck hunter, to an elite level competitor.

Not everything in the Remington range is a glorified hit and there are some of their products I am not that fussed about, and there have been murmurings that their quality has declined a little over the years.

However, I have not found this too be the case and it is probably more to do with the facts that old companies like these naturally come in and out of fashion.